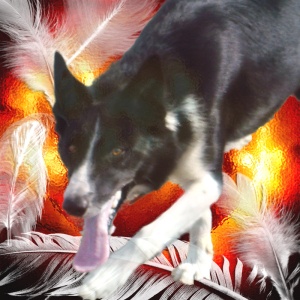 Talking about pressure …. again. This seems to be an issue that comes up regularly during lessons. Novices trying to figure out when and where corrections should be given. Since it’s not easy for a lot of students I thought I would approach the subject again. The simplest *visualization* I can give is when you put pressure on your dog – WATCH how the sheep react. That will tell you if you were correct or not. If the dog is right — the sheep will be right.

Dogs respond positively to pressure that:

1) Is physically in the right spot (for dogs and sheep)

2) Has timing behind it.

5) Is released at the correct moment – thereby rewarding the dog.

So, “simply put” what does that add up to? Pressure is:  A) in the correct spot  B) used when the dog is incorrect  C) released the moment your objective is achieved.

How quickly you apply a pressure, where you apply it and how hard you hold it are the “finer points” ….  telling the dog how he needs to respond to your pressure.

What pressure shouldn’t do!

2) Become something a dog tries to avoid.

When Pressure coincides with what the sheep are doing a dog will accept it calmly and learn from it. If the timing is off – a dog will learn to either fight or avoid pressure. If done incorrectly enough the dog learns to avoid/fight ALL pressure, If only done in certain circumstances (i.e. flanks) the dog will react in those circumstances by turning off or getting tense.

Pressure is not a fight – it’s a tool to teach a dog correct sheep work. If you insist on making it a fight you will encounter tension (causing a multitude of issues) or avoidance (also know as “taking the heart” out of the dog).

Let’s say you are trying to push a dog out on his flanks. Most students know the angle they are looking for is around his shoulder (to make his head turn away from the sheep). However, what usually happens is – as they are trying to put pressure in the correct spot – they “fall behind” the pressure point and end up chasing instead. Chasing is not pressure and it doesn’t push a dog out. So, the dog runs faster trying to outrun the pressure (and often the person “gives up” before the dog does – so he learns if he “doesn’t give” he wins) or shuts down (sensitive to the trainer and not understanding what is being asked of them with all that “crazy” running around).

So, the dog that is running is fighting (so “in essence” you are teaching him to fight a correction). The more “sensitive type” avoids/quits (“feeling” he was wrong but not understanding why – so the lesson learned was quit mentally when faced with a correction).

So since force isn’t the lesson you want to teach him … what is? Real training is allowing the dog to find the answer through his sheep. It’s not just “spoon feeding” (forcing) him into obeying. If your pressure is correct – your dog will see the results in the sheep and it will make sense to him. Having sheep react correctly to him will take all the “fight” out of the dog.