Is that a bit like Deja vu all over again :@)

A couple of years ago I started 2 pups that were as different as can be. They both had talent and proved that the training time spent … was well worth the effort. Since I seem to be “at it” again … I’ve been asked to update on the “new two”.

One is biddable to the point of being soft – the other so driven he has a hard time remembering I’m “in the picture”. The are both young (8 and 10 months) so at “this stage” … all I am doing is letting them learn how to work sheep properly. I don’t train “per se” (no flanks, get outs, take time, etc.). Just using the sheep to teach them balance, distance, pressure, etc. 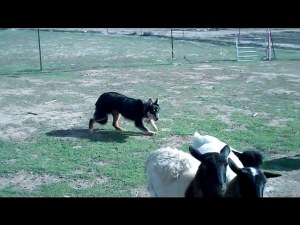 We will start with the softer one – named Cade. A LOT of natural talent but will have to be brought along very slowly. He can’t handle pressure (for now) so I put very little on him. He doesn’t want to be wrong and when he is – he just stops. All the confidence drains out of him and if I demanded “simple obedience” … I would ruin a really nice dog.

So, for now what I’m working on giving him more drive. So, when he gets a correction (and they all need it at some point) I can help him work through it without taking it so personally.

I put sheep up against a fence and ssssss him to just barrel through and get them out. NOT because he’s hesitant to go (he has NO issues with being afraid of sheep) but because it hypes him up. I push sheep and say “watch-watch” letting him flank back and forth trying to keep them together. He has so much feel this puts the chase in him – which is “the trick” I’m using to make him want to keep going when I see his confidence starting to drop. I will get to the point where I give a correction then a sssss and he will be able to take it and “bounce back”.

He has plenty of line but also good flanks (great combo :@) Too early to decide on the outrun but “think” he may have to be pushed out a bit (but not until we have our “confidence builder” in place).

Click HERE for video: of Cade just starting to work

The other guy named – it seems appropriately enough – Arco … is driven to work. If I walk out the door he says “you ready” and then runs to the sheep.

In “some ways” he’s the opposite “side of the coin” of Cade because when he’s wrong instead of stopping or slowing – he speeds up.  He also takes it personally (just has a totally different nature and response). He can get him self in a frenzy if I don’t keep him in check but “getting on him” to much – makes him “run through” corrections. He needs to learn to take a correction and not try to “outrun” it.

He has one issue that I will keep “my eye on” … he never turns his head away when he flanks. Usually that puts pressure on the sheep but he’s bending enough that the sheep are held but not pushed. I may have to correct that later but for now – it’s working for him (and I don’t argue with what’s working :@) However, I think the issue may arise when we start working on outruns.

Click HERE for a video of Arco just starting to work.

For now – both are a lot of fun to work … different dogs – different issues – different year and yet “all so familiar”. I seem to spend 1/2 my life as a cheerleader and the other 1/2 as a truancy officer :@)