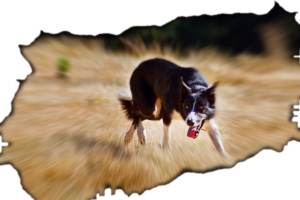 We communicate to dogs by putting pressure on and taking it off at the correct moment and “guess what” – dogs do the same to sheep —  pressure on/ pressure off.

For you to develop a good sense of timing, you first have to understand the exact sequence of events that constitutes good dog/sheep work. You can’t correct a dog if you don’t know he’s wrong. You have to watch the interaction between the dog and sheep and interpret what the dog is doing that is causing the reaction from the sheep you DON’T want. Then your correction must come before the sheep FEEL the dogs incorrect pressure.

When we train a dog by using pressure … we alter the pace and the direction we want the sheep to go. Removing  pressure is the dogs “reward.” It is the way we communicate to the dog, “Yes! That’s it.” If your timing is off when you either apply pressure or remove it, your communication becomes garbled. The dog will not make a clear connection between the pressure you put on him and the response you expect from him.

This is why training sheepdogs is SO difficult – you are looking for a response from the dog BUT it’s the sheep that are dictating the CORRECT response and you are “the middle man”.

So applying pressure with the correct timing is just “step one”. You also need to remove that pressure the moment the dog responds correctly. A constant pressure numbs the dog down and he simply learns to ignore it because it has no meaning. Releasing pressure when the dog is still wrong rewards him at the incorrect moment.

As we train dogs, we first show them what we want. Then we ask them. Only when they understand the physical action behind the word can we use  just voice/whistle commands. If at any point the “voice” isn’t communicating our intention then we go back to “showing” them (physically reinforcing what we want).

While giving a flank command may communicate to the dog that you want him to go “left/right” but it does not give him any information about shape, pace, or width of the flank. That’s where the finesse comes in – you need to learn how wide/tight a flank you need (in order to not upset the sheep) and then how to communicate that to him.

Keeping this “in mind” will curb the tendency of some handlers to think of commands as simply a direction for the dog to go instead of a reaction they want from the sheep. They think they can give a command for a right flank, for example, then just wait for the dog to end up in the exact spot they were envisioning without any more interaction from them. If between those start and stop commands, the dog gets no information from the handler … then he is on his own. Depending on his “nature”, he may decide to take over and do whatever he pleases or he may become anxious because he gets no reassuring feedback from his handler that he has done the correct thing.

Feedback works in both directions. A well-trained dog is the best teacher for a Novice learning to time their commands correctly. If you do not get the response you want when you apply your commands (and you know that the dog reads sheep better than you do) you can assume that the communication glitch comes from your side of the post.

The importance of timing the correction and the release of pressure correctly and of constantly receiving and interpreting feedback from the dog and sheep are two of the reasons that pairing a green dog with a green handler seldom works. However, not all handlers have the luxury of an open trained dog to refine their timing on. So, They often struggle to figure out if a lack of response to their commands is due to application of the wrong command, poor timing of their correction, or a dog that has learned to take advantage of its handlers uncertainty.

I’ve always said you can tell how someone works their dogs by watching how their sheep react to a dog … if well shepherded they will react to dogs without fear.