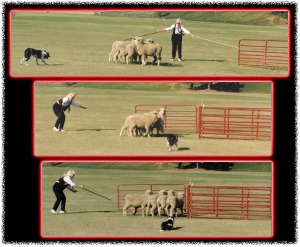 Last week in class we were working on penning and I happen to remember some pictures taken for the ABCN magazine (15-20 years ago at the Buellton, Ca trial) we used as a visual to go with a penning article.

I thought I would re-use them … hoping to help my visual/nonverbal students :@)

1.) In the first picture the  sheep have been brought to the mouth of the pen and are in the great spot for both the handlers side and the dogs. This spot will allow the handler to move back and forth if needed. It also allows the dog to put forward pressure while covering his side. The dog (walking on straight but leaning left) is putting more pressure on the ONE sheep that has not committed to the pen opening … while easing the rest of the sheep forward. The sheep aren’t facing the handler or dog but are thinking about going in the direction you want them to.

2.) In the second picture where the ONE sheep is looking at the dog (the rest have decided to go in) the dog is in a perfect spot to catch THAT sheep’s eye – but not so far ahead that it turns the other ones back. A couple more steps and the ewe closest to the dog would have stopped (she is looking into the pen but her head is high, and her eye and ear are “cocked” toward the dog).  Compare her to the sheep in the middle whose heads are down because they are not looking for an escape. Once you have stopped them from WANTING to go into the pen … it makes it “twice as hard” to convince them again. So, always try to keep heads pointed toward the pen – don’t block that forward progress.

2.) The last picture shows ALL the sheep accepting the pen and the handler slowly curling around to tuck them into the pen and close the gate. The dog is not putting pressure on as he knows they are going in. You don’t want a dog trying to push them after they have committed to going in as it can spook/split them.

A good pen is fun to watch as it involves cooperation between dog and handler – while neither can take their eyes off the sheep. So, timing, communication and knowing how fast, wide, etc. your dog flanks is a necessity … because you just don’t have time to look at your dog. Penning is watching the sheep’s heads and keeping them pointed into the mouth of the pen – press forward without shoving , flank without over/under flanking, wait but don’t dawdle. “In other words” it’s all a balancing act of pressure and patience :@)